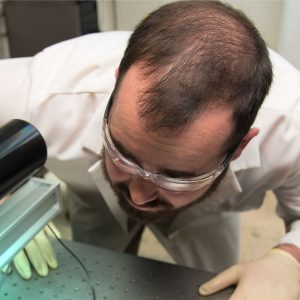 Vitamin A transport across the Blood Brain Barrier (BBB) is critical for CNS function. However, the mechanism by which Vitamin A (retinol) crosses the BBB is still not understood. Retinol is normally carried throughout the body bound to Retinol Binding Protein 4 (RBP4), which is in complex with another protein, Transthyretin (TTR). Recently, an endothelial surface receptor at the BBB, STRA6, has been identified as an acceptor for retinol via putative protein-protein interaction with RBP4. However, STRA6-knockout studies seem to suggest retinol still crosses the BBB even in the absence of STRA6, leading to debate about the mechanism of passage. My research is focused on elucidating the primary mechanism of retinol transport at the BBB. Specifically, we are utilizing CRISPRi STRA6-knockdown induced pluripotent stem cell (iPSC) models of the BBB to determine whether retinol requires STRA6 for transport across the BBB,
or if the lipophilic molecule “leaks” through the lipid bilayer in sufficient quantity to drive transport. Furthermore, we hope to understand what role RBP4 and TTR blood play in directing retinol transport through the BBB. To address these questions, we have developed wild-type recombinant RBP4 and TTR, as well as mutants that display altered binding affinities for the various ligands thought to be involved in serum transport (RBP4:STRA6 and RBP4:TTR). We are motivated to study retinol delivery at the BBB because retinol and RBP4 levels in the Alzheimer’s brain differ significantly from those of age-matched controls. Vitamin A, in its oxidized form retinoic acid, is a critical transcriptional regulator of many proteins synthesized in the brain, including several involved in the production and clearance of beta-amyloid peptide (Aβ), the aggregation of which is a hallmark pathology of Alzheimer’s disease. TTR has recently been
identified as a scavenger of Aβ, and since TTR normally carries retinol via RBP4, we propose that
scavenging Aβ may cause disturbances in the physiological transport of retinol through the BBB, leading to the observed Vitamin A imbalances in the Alzheimer’s brain.