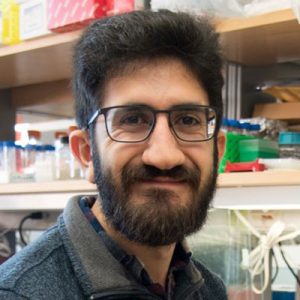 Alterations in the composition and functions of microbes within the human gut microbiota are linked to an ever growing list of human health conditions, including cardiovascular disease, obesity, and cancer. Despite the importance of the microbiota, molecular insight into the machineries of the abundant Bacteroides is lacking. Knowledge of transcription mechanisms in particular would aid in manipulation of Bacteroides for engineering the microbiota and developing symbiote-friendly antibiotics to improve human health. Capsule operons are particularly interesting because of cross-operon regulation mediated by novel transcription factors. Capsules empower Bacteroides by enhancing their ability to evade phages and human immune cells, adhere to gut epithelial cells, and compete with other organisms. Cross-operon regulation enables coordination of expression of distinct capsular polysaccharides (CPS) separately produced from eight CPS loci, but whether individual cells express predominantly single CPS or discrete CPS subsets is unknown. An understanding of CPS coexpression patterns requires molecular dissection of the underlying transcription mechanisms. These operons feature invertible promoters, universal transcription activators (UpxYs), and novel transcription inhibitors (UpxZs). Phase variable promoters enable bacteria to maximally vary their surface, but whether inversions at these operons are stochastic or regulated is unclear. Additionally, the regulon of each of the eight Y paralogs depends on the sequence that recruits them, but these sequences are unknown. Zs were suggested to inhibit subsets of heterologous operons’ expression by binding their Ys, but this hypothesis was not rigorously tested. After producing Bacteroides RNA polymerase (RNAP), Ys, and Zs, I identified several Y recruitment sites and found that Zs indeed inhibit Ys directly. I hypothesize that promoter inversions are stochastic and that CPS co-expression patterns are determined primarily by the Y protein regulon and Y–Z interaction network. To dissect this complex regulatory circuit, I will use strategic collaborations and obtain training in biochemistry, genomics, and genetic manipulation of wild, anaerobic Bacteroides to:
1) Identify additional Y recruitment sites, determine the basis for Y operon specificity, and simultaneously determine the first structure of Bacteroides RNAP,
2) Establish the molecular basis for and the network of interactions between all 64 Y–Z pairs, and 3) Determine promoter orientations and CPS co-expression patterns within individual bacterial cells.
Collectively, accomplishing these aims will help us better understand how these organisms vary their capsules to dominate the human gut microbiota. I will characterize the only known direct inhibitor (Z) of the universal NusG–RfaH–Spt5 transcription factor family. I will improve our understanding of Bacteroides transcription and acquire evolutionary insight into fundamental transcription mechanisms to further approaches for engineering the human gut microbiota and developing symbiote-friendly antibiotics.