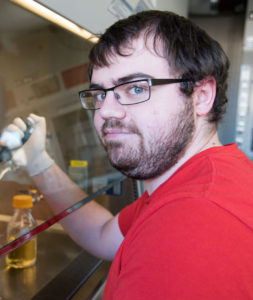 Development of small molecule agonists and antagonists of SdiA in S. enterica and E. coli

Prior studies have identified several characteristics of naturally produced N-acylhomoserine lactones (AHL) that can activate SdiA; however, no chemical inhibitors have been identified, nor have significant modifications to the AHL structure been probed. Using a cell-based reporter strain for SdiA activity in both S. typhimurium and E. coli, a wide variety of AHL analogs synthesized by previous Blackwell group members were evaluated for activity. By screening this compound library, the SAR of ligands was elucidated and potent agonists and antagonists were identified for use in further studies of this signaling system. Specifically, in vitro mechanistic studies will be performed to better understand how ligands modulate the activity of SdiA, as a model for other LuxR-type receptors. In vitro assay development is ongoing.