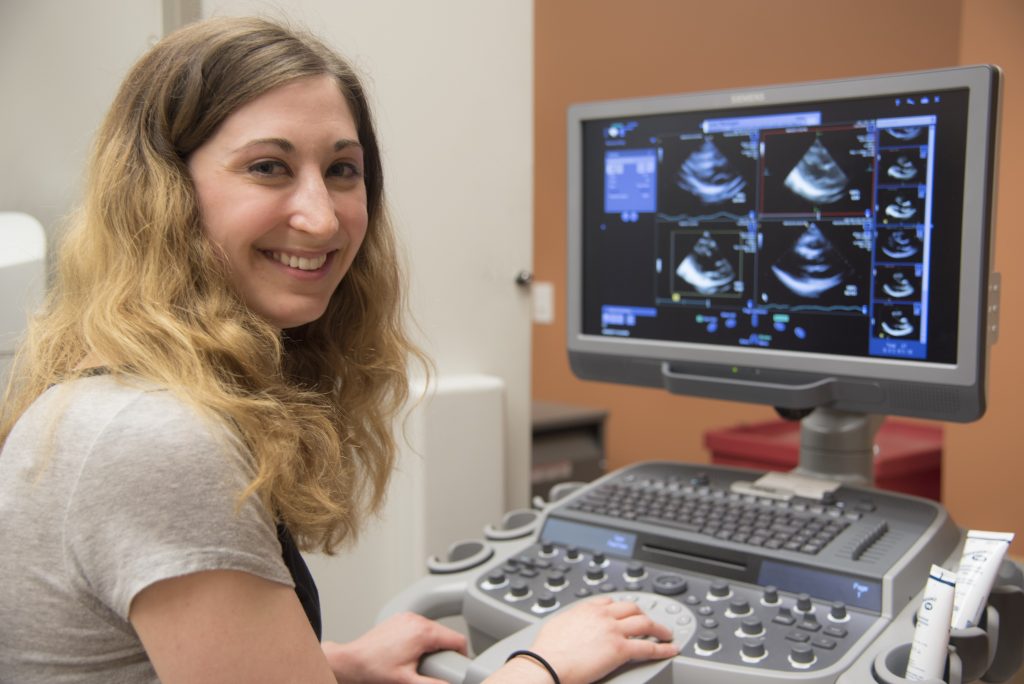 Biotechnology Training Program (BTP) trainee Lindsay Bodart first learned about patents and intellectual property in her Foundations of Biotechnology course at the start of graduate school. Little did she know that a few years later, she’d be filing a patent on a tool she created to help in her research.

“I knew what a patent was, but that class was really where we started talking about topics like intellectual property, how and why to file patents, and starting a business,” Bodart explains. “That was where I learned how our research could be used not just for advancement in academia but also in industry and other contexts. It started to connect those dots for me.”

As a Ph.D. student in the UW–Madison Department of Medical Physics, Bodart is part of the lab of BTP mentor and Professor Michael Speidel, which works to develop novel imaging technologies that can be used to help guide interventional procedures. One of their focuses is on cardiac interventions, surgeries that help repair valves or chambers of the heart.

Bodart specifically works on a problem physicians face when guiding catheters or other minimally-invasive devices through the blood vessels. Right now, they must look at two screens, one that has the x-ray image of the chest and another that displays ultrasound images of the heart, in order to navigate the catheter to where it needs to go in the heart. Both image displays have different benefits — x-ray images objects like bone and catheters clearly, while ultrasound captures soft tissues and organ structures — but researchers like Bodart believe there’s a better way to present this to surgeons. Her research is working to combine these two imaging modalities into one.

“The idea behind my research is to actually take those two images during the procedure and register them into one coherent display,” she explains. “That would help the physician performing the procedure as they’ll be able to see where the device is relative to the anatomy directly, rather than having to glean information from two completely separate displays.”

To work toward this goal, she needed a way to test her ideas on how to combine the displays. Repeated x-rays would be too much radiation for a human volunteer or patient so she devised a piece of hardware called a “phantom.” It’s an object that can be used to mimic the properties of the human body in imaging.

The phantom is an object that’s in the shape of a big cylinder, about the size of the human thorax. They insert different columns into the phantom and also fill it with a slurry-like substance consisting of small pieces of graphite and agar. This allows it to mimic human tissue in imaging.

“We can then embed objects into each insert that can be visualized with both x-ray and ultrasound,” says Bodart, who is in the fourth year of her Ph.D. “We can use a registration algorithm and visually see how it performs. We then generate a registration error metric that allows us to measure how well it is performing compared to other experiments and other methods.”

Bodart and her advisor soon realized their tool wasn’t just useful in their research but could also be used to train physicians in performing these kinds of heart procedures. It was then that they decided to try to patent their technology and reached out to the Wisconsin Alumni Research Foundation (WARF). WARF worked to get more information from them and then worked with a patent attorney to write a patent. They submitted it in the summer of 2019 and are waiting to hear from the United States Patent and Trademark Office on its status.

“It was very educational and enlightening to go through this process,” Bodart says. “Don’t feel pressured to do it when you’re young in your career, but if it comes naturally from your research, be sure to take advantage of it.”

Bodart’s interest in this work stems from a family history of heart issues, and the support she found in BTP allowed her to explore those passions, she says. She ultimately wants to be a clinical medical physicist, who are responsible for ensuring that patients receiving radiation therapy are getting accurate and safe doses.

“BTP has been supportive since the day I started the program,” she says. “It’s been a wonderful experience, and the mission of interdepartmental communication and collaboration is so important. In any field, there is a whole melting pot of people who come from different scientific backgrounds — and you have to be able to communicate effectively and work together. BTP is a great way to work on those skills.”