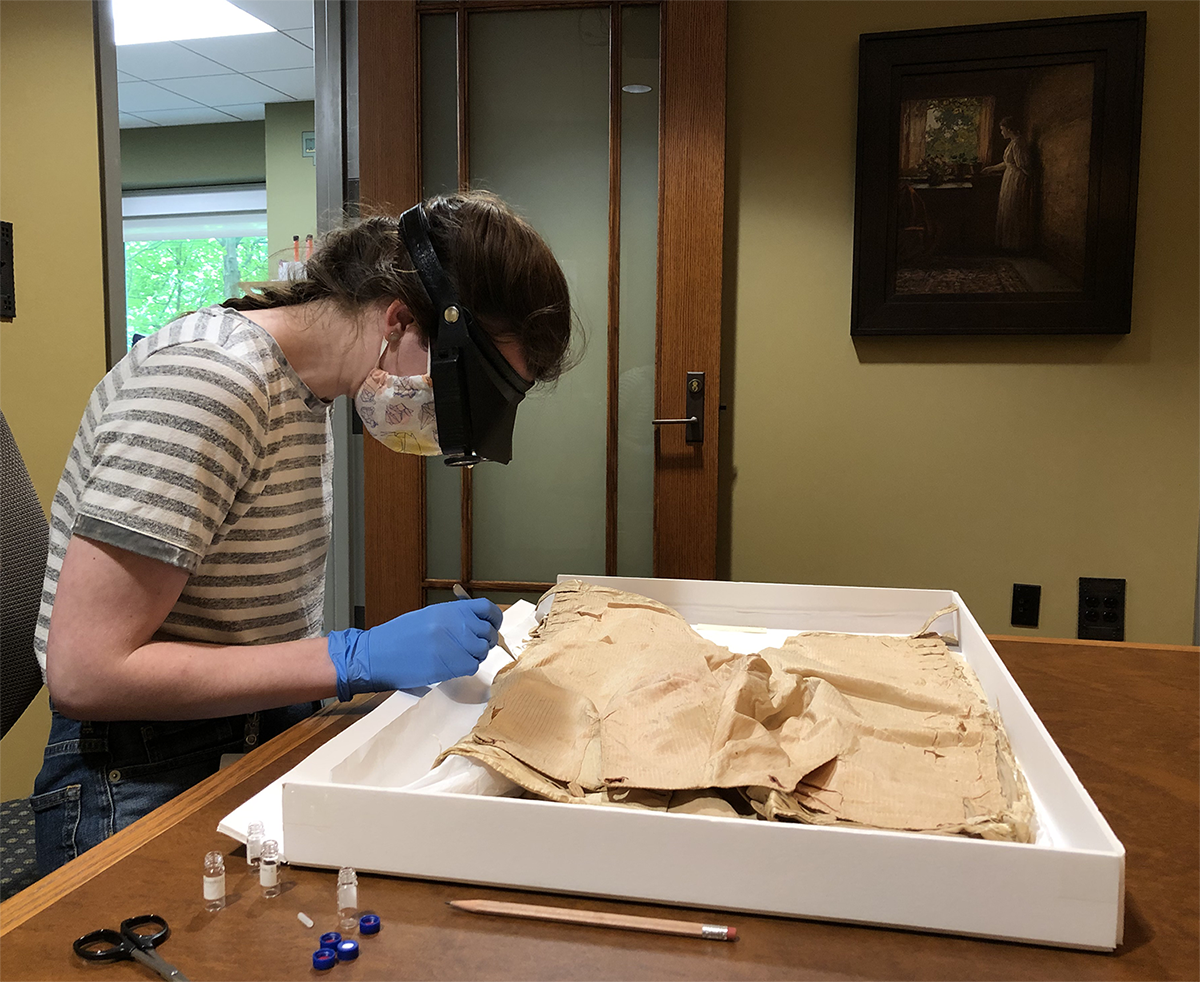 In 2020, chemistry graduate student Erin Birdsall received a unique opportunity — to the live the life of a conservation chemist as an intern at the Indianapolis Museum of Art (IMA).

“I’ve always been interested in art history, and when I was an undergrad at Middlebury College, I learned that you could work as a scientist in an art museum, so that career path was in the back of my mind,” Birdsall says. “Then in 2019, Gregory Smith, a senior scientist at the IMA, came to the UW–Madison chemistry department and mentioned that the museum was always on the lookout for interns. Despite COVID-19, he made it work so that I could still come, and I’m very grateful for that.”

Funding for Birdsall’s internship was made possible through the Biotechnology Training Program (BTP). The BTP offers opportunities, including focused coursework and an internship, for doctoral students to obtaining training and experiences they might not otherwise.

Birdsall lived and worked on-site at the IMA in summer 2020. There, she facilitated a massive project involving an epitome of High Renaissance art.

The Miraculous Draught of Fishes

The Miraculous Draught of Fishes is one of ten tapestries in Raphael’s Acts of the Apostles series. Each tapestry embodies quintessential features of High Renaissance art, including harmonious colors, naturally posed figures with serene faces, and realistic proportions and perspectives. The Miraculous Draught of Fishes depicts a story regarded as a founding moment of Christianity: Jesus tells Peter to cast his net into the water, after which Peter and his fellow apostles make a miraculous catch of fish. Peter, James, and John, having witnessed this miracle, join Jesus as disciples. The original Acts of the Apostles tapestries were hung in the Sistine Chapel, while today the surviving tapestries and some reproductions are displayed in a gallery.

Several reproductions of The Miraculous Draught of Fishes were woven after Raphael’s original designs reappeared in the 1600s. One such reproduction, woven in the workshop of Belgian weaver Henrich Mattens, made its way to the United States. In 2016, the tapestry was given to the IMA, by which point it was unexhibitable — ongoing exposure to light and gravity during 50 years of exhibition had resulted in structural and esthetic concerns. The tapestry’s fortunes changed a few years later when the IMA received financial resources to study and restore the 400-year-old tapestry through a Bank of America Art Conservation Project grant.

Birdsall was intimately involved in performing state-of-the-art dye analyses on The Miraculous Draught of Fishes. An initial step of the restoration process, dye analyses explore different tapestry samples to understand what dyes (organic, colorful molecules used at the time a tapestry was created) and mordants (inorganic salts that help dyes bind to the fibers of a tapestry) were used to make a tapestry and to identify colors and fibers that might be used for contemporary repairs.

“The data will tell you if there’s iron in the dye, or aluminum, or nickel, and then you’ll get these mass spectra that essentially are these fingerprints that are very well-associated with molecules. Because dye molecules are relatively well-characterized, you could say that a blue color was created with an indigo dye, for example,” says Birdsall. “That allows you to learn, in the art history perspective, what were the common dyes and mordants being used at the time the tapestry was woven?”

With her internship supervisor and an expert volunteer at the IMA, Birdsall performed dye analyses using three techniques: gas chromatography mass spectrometry (GCMS), x-ray fluorescence, and liquid chromatography mass spectrometry (LCMS). Each technique generates spectra that provide information about components in the dyes at specific locations on a tapestry. Though LCMS is the traditional dye analysis technique, GCMS might provide an alternative for museums that might only have a GCMS system.

Birdsall’s data helped identify dyes from several samples that were not natural to the early 1600s, suggesting previous repairs at those locations. And her comparative analyses demonstrated that equivalent results can be obtained using GCMS and LCMS, hopefully making similar studies available to museums with a GCMS system. After Birdsall finished her internship, the tapestry underwent restoration in Europe and is now actively installed in the IMA’s galleries.

When her internship ended, Birdsall returned to Madison, where she works as a research assistant at the UW–Madison Department of Chemistry. Her Ph.D. research in Martin Zanni’s group combines surface-enhanced two-dimensional spectroscopy and ultra-fast lasers with biology to study membrane-bound proteins. Her experiments will help scientists understand how nerves and other biological entities work.

“I’ve been doing a lot of development and thinking about how scientists can perform surface- or interface-based experiments to understand how ions like potassium or sodium move across lipid membranes through pores. A lot of my research has been building up to a big experiment where we can watch a protein move in real-time after a voltage is applied,” Birdsall says.

After defending her Ph.D. this semester, Birdsall will start a postdoctoral fellowship at the Smithsonian Institution. There, she will work on a preventative conservation project with the Museum Conservation Institute and the National Museum of the American Indian.

“This postdoc will help me finish my training in the field of heritage science [also known as conservation science],” Birdsall says. “The internship at IMA really cemented what I want to do in my career.”

This story was written by Catherine Steffel, Ph.D. Tapestry images were obtained with permission from the IMA and downloaded from the IMA Collections website. Conservation oversight was provided by Amanda Holden, conservator of textiles at the IMA.